Oct. 2022 Graduate student Mr.Yuxin Liu and Assistant Prof. Okada gave a presentation at the Chugoku-Shikoku Virus Research Meeting. All of them are wearing masks except for when the picture was taken.

Aug. 2022, Special lecture by Dr. Tagawa from NIH, USA (mask removed only when photographed). He gave a lecture on the latest research on non-coding RNA and herpesviruses.

March 2022, Members of Yoshiyama Lab. Three graduate students will join the group (Masks are removed only when photographed).

November 2021 We had a farewell party for Mr. Sintayehu Fekadu and Ms. Andy Visi Kartika. Both of them successfully completed their PhD defense presentations. We look forward to their success in their home countries. The farewell party was held under the infection prevention measures of COVID-19.

April 2021. It is this year’s Yoshiyama lab memnbers. Three members will join to our lab in near future.

March 2021, We held a farewell party for Ms. Ueno who was a lab stuff menmber. We are grateful for her long-standing contribution to the lab. We look forward to your future success.

March 2021, we had a farewell party for Mr. Amrisal returning to Indonesia. Ventilate as a measure against corona and wear a mask. Only souvenirs were distributed. We wish your future success in Indonesia.

On Feburary 2021, We held a farewell party for Ms. Ding and Dr. Kanehiro and wellcome party for Mr. Liu. We ventilated as a measure against corona and wore a mask. Thank you for your hard work. We look forward to your future success.

On November 2020, We held a farewell party for Ms. Praphatson, who was dispatched from Khon Kaen University, Thailand, last year and stayed for almost a year. We ventilated as a measure against corona and wore a mask. Thank you for your hard work. We look forward to your future success.

On April 2020, We celebrated Prof. Yoshiyama’s birthday. As a countermeasure against coronavirus infection, we provided sufficient space and also did ventilation.

On April 2020, this year’s Yoshiyama lab’s members.Three members lacked in this picture.

On March 2020, we had a farewell party for Ms. Tanaka, a second-year master’s student, Ms. Hyoji, a fourth-year doctoral student, and Ms. Hamada, a research support member. No meals were taken to prevent coronavirus, only commemorative gifts and photos were taken. We wish you success in new place.

On November, 2019, Prof. Jeffrey Toretsky, who is a professor in Medstar Georgetown University hospital, visited our departement. We discussed about our collaboration.

On November, 2019, We had a farewell party for Ms.Yuting Kang from Ningxia Medical University and a welcome party for Mr. Aung Phyo Wai.

On the first day, we concluded a medical school agreement with Universitas Islam Indonesia and gave a lecture on research in the large hall that can accommodate 500 people in the afternoon.

On the afternoon of the second day, we joined key members of Universitas Islam Indonesia ‘s School of Medicine, Dentistry, Nursing, and Public Health to discuss strategies for revitalizing the university. 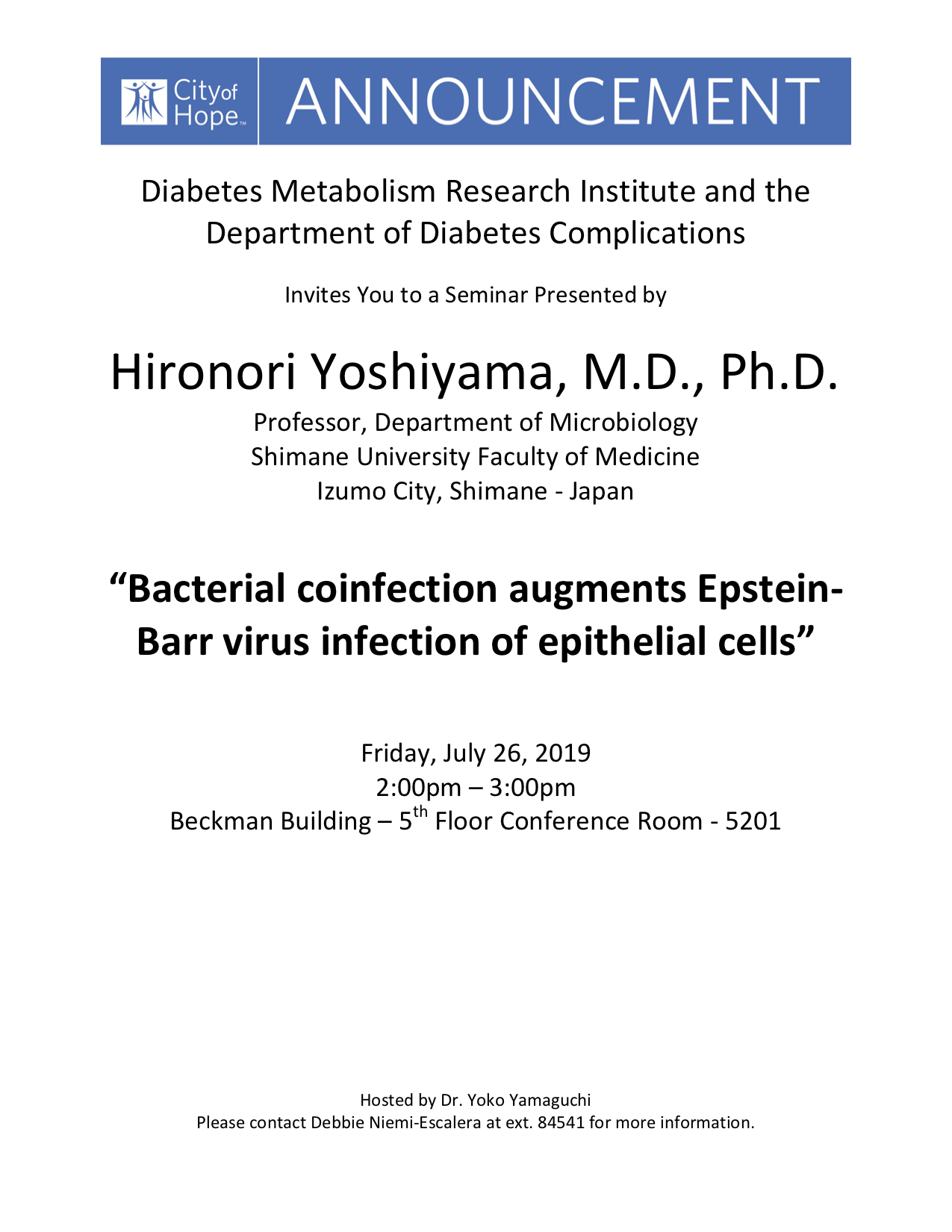 In July 2019, Prof. Yoshiyama will give a lecture at City of Hope, Diabetes Metabolism Reseaerch Insittute, Los Angeles, California, USA. The City of Hope was established in 1913 as a sanatorium for tuberculosis and is now one of the national institutes representing South California.

In June 2019, Prof. Toshinori Nakayama, who is a dean in faculty of medicine, Chiba University, did lecture for undergraduate student.

In May 2019, Prof. Yoshiyama visited Thailand from May 6 to 20, for a degree examination of Mr. Chukkris Heawchaiyaphum, who stayed in our classroom for one year and three months in collaboration with the University of Kongen in Thailand. Prof. Yoshiyama received a great welcome. Chukkris took you to Ayutthaya.

In April 2019, This year’s Yoshiyama lab members. Two members will join to our lab in near future.

In September 2018, Prof. Pientong and Dr. Ekalaksananan, who are researchers in Khon Kaen University, visited our lab and discussed about our project. They are collaborators for our project and Mr. Heawchaiyaphum came from their lab to do EBV research.

In July 2018, Dr. Kayama who is a researcher of bacteriology in Hiroshima University, visited our lab and discussed about our project.

In July 2018, Dr. Iizasa joined 20th Japanese RNA meeting in Osaka. After that,  he communicated with Prof. Asahara and his lab members from Tokyo medical and dental university, and Prof. Saga from National Institute of genetics.

In July 2018, We invited Prof. Hatakeyama from Tokyo university for undergraduate students lecture. He is very famous scientist in the world about Helicobacter pylori study.

In June 2018, Prof. Jean Pieters, who is a researcher of infectious immunity in University of Basel, visited our lab and discussed about our project. He is a collaborator for our project.

In June 2018, Prof. Yoshiyama was invited for RGJ Progress 19 in Thailand. This is a special PhD program for scholarship.

In April 2018, This year’s Yoshiyama lab members. Several new members will join to our lab in near future.

In March 2018, There was a farewell party for Ms. Seiko Yamabe.

In August 2017, Prof. Yoshiyama was invited from KHON KAKEN University, Thailand. And he did special lecture in this university.

July 2017, There was a farewell party for Mr. Timmy Richardo.

In April 2017,  This year’s Yoshiyama lab members. We will add three members as our lab.

In March 2017,  Mr. Timmy Richardo (Indonesia) could get Master degree in our university.  He will become a PhD candidate from next month. Congratulations!

In March 2017, we communicated with Dr. Takumi Koshiba who is an associate professor in Kyushu University. Mr. Sintayehu Fekadu, who is a lecturer in Hawassa University (Ethiopia), will join to our lab from next month as a PhD student.

December 2016,  this is our lab’s year-end-party.  Mr. Amrizal Muchtar joined our lab as a PhD student.

In June 2016,  Dr. Iizasa and Prof. Yoshiyama participated “Gordon Research Conference NPC” at Hong Kong. This meeting was performed in the Hong Kong University of Science and Technology (HKUST), and scientists did presentation and/or discussion from morning to night time. HKUST is far from center of Hong Kong, and it is similar to “tropical southern island”. Dr. Harald zur Hausen accepted Nobel prize in Physiology or Medicine 2008. He identified role of HPV in cervical cancer and Dr. Yoshiyama is a grand disciple of him.

In June 2016, Welcome party for Ms. Isshiki as a Collaboration Researcher  (from Yamaguchi Prefecture University), Ms. Yamada as a Experimental Assistant.

In March 2016, Ms. Hyoji Kim (candidate of Dr. degree student) was confirmed as a scholarship student from The Ichiro Kanehara Foundation for the Promotion of Medical Sciences and Medical Care. Congratulations !

In February 2016,  Mr. Amrizal Muchtar, who is a lecturer in Medical school of Islamic University of  Indonesia, visited our lab and enjoyed Sushi and Udon.

In November 2015, Dr. Iizasa, Mr.Richardo and Prof. Yoshiyama joined the 63rd Annual Meeting of Japanese Society for Virology in Fukuoka. After meeting, we communicated with Prof. Fujimuro and his lab members from Kyoto Pharmaceutical Univ, Prof. Ueda from Osaka Univ, and Dr. Kanda from Aichi Cancer Center.

In September 2015, Dr. Iizasa joined “The first cancer symposium of Affiliated Zhongshan hospital of Dalian University” (Dalian, China). He was awarded as a distinguished professor in this university. This hospital was founded in 1907 by Japan. Some buildings kept good condition during 100 years.

In September 2015, There was a wellcome party for Ms. Hyoji Kim and farewell party for Dr. Fenggang Yu

In July 20-21, 2015, There was a 12th EB virus meeting with international session in Bigbird, Izumo.  Thank you for joining of this meeting.

In March 2015, Welcome party for Mr. Timmiy Richardo as a Foreign researcher (He will enter master’s degree of Shimane University), Ms. Sayuri Hamada as a Lab tech. And Farewell party for Dr. Yutaka Tatano (will move to IUHW as a Lecturer).

In November 2014, with my last colleagues at Institute of Genetic Medicine, Hokkaido Univ. Attending the farewell party for Assoc. Prof. Dr. Masahisa Jinushi.

In November 2014, with medical students. The third left is Mr. Kazuki Hamada who worked with me 3 yrs before. He is now in 6th grade of Yamaguchi Univ. The others are 3rd grade students of Shimane Univ.

]In September 2013, With  Dr. Fenggang Yu (Singapore) in Sapporo